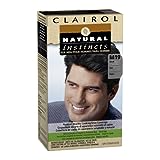 Get your best color
The color on the box represents the color you are adding to your hair, so remember this simple formula: your current color + your best Natural Instincts shade = your new, natural-looking color. For best results, stay within two shades of your natural hair color.
Keep your color healthy-looking
Do…

Step 2:
Color Conditioning Treatment
Superior conditioning to the leading men’s color. Get up to 4 weekly treatments to protect hair and seal in color.

Plus:
No ammonia, Low peroxide
Leaves hair looking thicker, fuller • As easy as shampooing • No drip, no mess • Premium men’s gloves • For beard and mustache too!

What products does Clairol make?

Should individuals with natural, uncolored hair use different haircolor products than those who have previously colored their hair?

It depends on the desired result. If you are coloring your hair for the first time and only want to enhance your natural color, try a Demi-Permanent (lasts through 28 shampoos) product close to your natural haircolor. If you want to go lighter, you need to select a Permanent (lasts until your hair grows out or you recolor) haircolor, then refer to the insert that comes inside your box of Clairol haircolor and follow the instructions for first time application.

Should people who want to cover gray hair use different coloring products than those who don’t need coverage?

How can I test-run a color before committing to coloring my entire head of hair?

Strand test is a simple method for you to test haircolor on a portion of your hair before doing the entire application. (The instructions are in your haircolor box.) It’s an important step because it’s the only way to see exactly how the shade you selected works with your starting haircolor to achieve the resulting color. A strand test will also help you determine the exact timing you’ll need to color your whole head.

Where can I find product instructions?

Product instruction inserts are inside your haircolor box.

BEFORE YOU COLOR: 48 HOURS IN ADVANCE

HAIR COLORANTS CAN CAUSE ALLERGIC REACTIONS WHICH IN RARE INSTANCES CAN BE SEVERE. TATTOOS MAY INCREASE YOUR RISK OF ALLERGY, TO REDUCE YOUR RISK FOLLOW THESE INSTRUCTIONS:
1. DO NOT USE THIS PRODUCT AT ALL IF:

In these cases do not conduct the skin allergy test and consult a doctor before using any haircolor product.
2. PERFORM A SKIN ALLERGY TEST 48 HOURS BEFORE EACH PRODUCT USE even if you have already used coloring products before.

MUST BE PERFORMED 48 HOURS BEFORE YOU COLOR YOUR HAIR:
You will need a cotton ball or swab, a plastic bowl and a plastic spoon.

NOTE: IF A RASH, REDNESS, BURNING OR ITCHING OCCURS YOU MAY BE ALLERGIC. STOP. YOU MUST NOT USE THIS PRODUCT.

WHAT TO DO IF YOU HAVE A REACTION DURING OR WITHIN THE NEXT 48 HOURS OF COLORING YOUR HAIR IF DURING COLORING YOU EXPERIENCE:

Keep all haircoloring products out of reach of children.

Do the Strand Test each time you color to determine optimal timing and color results. Perms, relaxers, previous color, and the sun can affect your results and timing.
You will need: scissors, tape and a clock.

Fill in your personal color time below:
My timing for desired color: _______ minutes.

Tubigrip is an elastic tubular support bandage used for the effective management of strains, sprains, soft tissue injuries, general edema and rib cage injuries. Is easy to apply and re-apply, delivers consistent support regardless of the variation in app

Aveeno Living Color Color Preserving Shampoo for Medium-Thick Hair is designed for the unique needs of color-treated, medium-thick hair. This rich-lathering shampoo breathes new life into your color by revealing vibrant shine with each wash, while perfectly balanced cleansers carefully lift away impurities to enhance color clarity. Our Active Naturals formula features the power of color-fortifying lupine botanicals, scientifically shown to smooth the cuticle, helping to lock in color for long-lasting, healthy brilliance for vibrant color that comes to life wash after wash.This shampoo is specially formulated for medium-thick hair, with ACTIVE NATURALS color-fortifying lupine botanicals, and is formulated to protect your hair to help extend the life of your color.

As effective as it is unique, the patented BlenderBottle by Sundesa, will effortlessly mix lump-free protein drinks, nutritional supplements, and meal replacement drinks. It is also great for mixing eggs (omelets, scrambled, French Toast), pancake batter, gravies, homemade dressings and marinades, pudding, yogurt smoothies, and much more! It also works great simply as a water bottle. The key to this unique product is what’s inside. It’s called a BlenderBall. The BlenderBall is made from 316-grade (surgical grade) stainless steel and electropolished to remove impurities and give it a high-luster shine. The product is stylish, easy to use, easy to clean, and simply the best portable mixer on the market. Warning: Not for use with hot liquids. Hot or warm liquids (and other ingredients such as pancake batter, soda, etc.) may build up pressure within the bottle and cause flip top to open unexpectedly and spray contents. Open with caution. 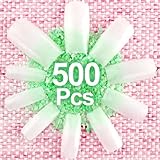 50 Tips in each size 0-9, 500 pcs totally. Full Well.High standard ABS plastic for professional use.Suitable for use with gel, acrylic or fibreglass applications.Each size is separately packaed in pre-numbered bagColor: Natural 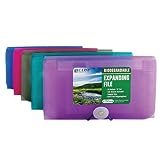 C-Line, a leading manufacturer of office supplies with a product line that features storage, identification and organization products, offers a range of Earth Friendly or Green office products for your storage and organizational needs. C-Line Coupon Sized Biodegradable 13-Pocket Expanding Files incorporate an additional additive that allows them to biodegrade in landfills. These coupon-sized expanding files are the perfect solution for holding, protecting and organizing coupons, recipes, notes, cards, and other small items. They are made of strong biodegradable polypropylene, which is both durable and water-resistant, and feature a drop-front flap closure for easy access. The front of the file has a clear-view pocket for inserting labels, titles or business cards. C-Line Biodegradable 13-Pocket Expanding Files have 12 tabs for quick view organization, and are available in an assortment of colors. Question by smile: Will my eye color change if i eat very healthy foods and become a healthy person?
my eyes are brown and I was reading an article saying that if you are healthy, then your eyes will change to a different color. i really want my eyes to be green or blue or gray. i DONT want to use contacts and i DONT want to have surgery becuzzz its too risky.
ohh, and what foods should i eat?
THANK YOU BERRRRY MUCH!!!! <3 Best answer:

Answer by Pho
No. That is not true. Your eye color is genetic. You can’t change your DNA sequence. I’m assuming you misread the health article, or the health article was completely false. But there are many positives to healthy eating that are often over looked.