Question by marsmilkyway: How to maintain Balance while living in New York City?
It’s difficult to live in a city like New York and have that kind of ‘life balance’ I try to maintain. Cities like this urge you to be decadent, debaucherous, to consume above your means, in all excess, as so many autonomies running around, how can one ever take a moment ‘away from it all’ without actually leaving? Does anybody have any tips for an urban dweller cut off from Nature, Silence, Light and Reflection?

I do find that New York’s population is generally very healthy, eat well , fresh, and many organically; much exercise (at the very least all the walking, climbing stairs, etc).. Even little things, like I heard the Japanese alignin their beds north to south to affect how they sleep and wake up in the morning..
So…
Anybody have any tips for healthy living in New York?

Answer by Chaney34
Yeah go to sleep every once in a while for 12 hours. 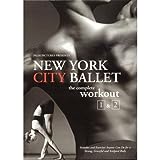 A deluxe edition DVD set comprised of the best-selling fitness videos New York City Ballet Workout Volume 1 and 2. The videos are designed to help you develop the strength, grace and poise of a dancer. An excellent alternative to fast paced, high-energy workout routines, this unique exercise program balances art, life and fitness into the perfect workout for any age or fitness level. Whether you love ballet or are simply searching for an alternative workout regimen designed to produce a strong, graceful body, this program will deliver exceptional results. Note: for another look at the High Line, about a month after this set was photographed, and also when the weather was somewhat more interesting, see my Flickr set Return to the High Line – Jul 2009.

A recent Wikipedia article informs us that "the High Line is an abandoned 1.45-mile (2.33-km) section of the former elevated freight railroad of the West Side Line, along the lower west side of … Manhattan between 34th Street … and Gansevoort Street in the West Village. The High Line was built in the early 1930s by the New York Central and has been unused as a rail line since 1980. Part of it reopened as a city park on June 8, 2009."

Since its opening a few days ago, the High Line park has gotten quite a lot of publicity including a June 10, 2009 Huffington Post blog/article titled "Story of Reusing the City: Welcome to High Line," and a June 15-22, 2009 New York magazine article titled "The Twin Pleasures of the High Line: A Petite New Park, and a District of Lively Architecture" (the online version of which seems to be much more sparsely illustrated than the hard-copy version, though I’ve just been alerted to the existence of a PDF image of the photos from that New Yorker article, which you can find here).

So I ventured down to the West Village today, along with a gazillion other New Yorkers, tourists, and visitors, to see what it looked like. Photographing the crowds along the walkway was probably a worthwhile exercise, because it serves as a reminder of how many people a park like this must serve, in a city the size of New York. On the other hand, there’s no question that I’ll want to come back in a few months, after the novelty has worn off, to see what it looks like when it’s essentially empty (showing up at 7 AM when the park opens, instead of noon, would probably help too!).

It was a gray, leaden day when I strolled through the park, with sprinkles of rain as I reached the northern end of the park at 20th Street — and that probably didn’t do much to help the pictures. I’ll come back on a sunny day, sometime, and I may well wait until late afternoon or early evening, in order to catch the sunset glow in the western New Jersey skyline…

But for now, the pictures do offer a view of a very different kind of park than most people envision; instead of vast, open, grassy fields and views that try to deny the very existence of the surrounding city, this park is woven right into the abandoned train tracks, the surrounding buildings, and the abandoned piers along the Hudson River. And it has obviously inspired a wave of innovative architecture in the new hotels and office buildings that have sprouted up along the way; where possible, I’ve tried to identify the buildings, too, so you can draw your own conclusion about whether all of this is beautiful, inviting, or just a little bizarre.

If you’re interested in finding out more, the afore-mentioned Wikipedia article has a number of links to articles and other resources about the past, the present, and the future of the High Line… Image by Sifu Renka
I followed the recipe for the Light New York Cheesecake from Cook’s Illustrated: The Best Light Recipe and ended up with something so creamy and rich tasting, but knowingly 1/4 the fat and almost 1/2 the calories of the original NY style!
Substitutions that were key were low fat cream cheese, non-fat yogurt cheese (drained yogurt) and low fat (I used non-fat) cottage cheese. All blended up with some orange rind (instead of the lemon rind in the recipe) and a few eggs, and voila. A brief high (10 min) then low temp in the oven for 1.5 hours, lots of cooling time and an overnight chill in the fridge ensured it was set.
My uncle and his family (2 cousins included) are in town until the end of the week and tonight we’re all congregating at my aunt’s for dinner. My Aunt Rosa LOVES cheesecake, but is also scarily health conscious. In a brief convo I mentioned I’m bringing cheesecake (I heard a gasp followed by the exclamation: "I LOVE cheesecake") and when I emphasized it was low fat, and lower calorie, I sensed her heart stop (momentarily) before racing with excitement.
Needless to say, when I mentioned that I tried some for breakfast to make sure it was decent, she let out a whine because that would be the lesser amount I would bring over.
LOL, I have a feeling that I’ll be making this soon again.

Just for the plating I put some fresh blueberries and a sliced apricot, as well as some raspberry sauce. But seriously, I just indulged in the (low fat!) cheesecake alone… 1/4 of the 9" pan… good breakfast… 😉