Question by : How important is it to drink water rather than tea, juice and such for hydration and health ?
Hi, I have a health condition where they want us to stay hydrated and drink lots of fluids (water). For some reason, I’ve never liked water and will drink some flavored type of drink that is water based, but I’d like to know from a nurse or healthy living type person, how much better is water than say fruit juice or herbal tea ? Not just opinion, but experience with this or facts or statistics.

Answer by Ob
The fruit juices are almost all loaded with sugars:
Fructose, Dextrose, Maltose, Sucrose – just about anything ending in -ose is sugar and will make you gain weight.
As for me, I mostly drink distilled water.

Want a rump as juicy as Beyonce? Find out how in our fitness guide. And for more celebrity diet and exercise inspiration make sure you tune in to our brand n…
Video Rating: 5 / 5

Question by Ponchik: Why are zero-coupon bonds usually priced using a semiannual interest rate rather than annual?
Why are zero-coupon bonds usually priced with a semiannual interest rate as a discount rate rather than annual? I mean, since there are no actual coupons anyway, why use semiannual discounting? Is this some sort of ‘tradition’ or is there a technical explanation to that?

Answer by John W
As you’ve noted, zero coupon bonds have no interest coupons and hence no interest payments however they do have an overall yield over the life of the bond due to the discounted market price when compared to the redemption value at maturity. Such bonds are often competing with normal bonds that often have semiannual coupons which are often marketed by their semi-annual rates so for effective comparison, a fictitious semiannual coupon rate is calculated that would result in the same overall yield in order to compare apples with apples.

The technical reason is that people are idiots and don’t realize the differences between what they are comparing.

Answer by Gary
The pan doesn’t contribute to the healthiness as much as the contents. If you use olive or peanut oil or very little oil, either one will make a great, healthy dish Image by jazzijava
A mix of ready-to-eat and unripe Concord grapes from our backyard vineyard made for a perfectly set, tangy jam that I canned to give away for Christmas gifts! I have another 5 lbs of grapes in the freezer for a second batch!

A steaming bowl of soup with fresh bread and a green salad, a tempting combo plate of crisp, complementary salads–these Daily Specials have been staples of Moosewood’s ever-changing menu board since the restaurant opened its doors more than twenty-five years ago.

Over the years the creative chefs of the Moosewood Collective have introduced literally thousands of new soups and as many salads, all devised to showcase the fresh seasonal produce, vibrant ethnic flavors, and meatless food products that form the core of their cuisine. Now, for the first time, they have gathered the very best offerings from their vast soup and salad repertoire, as well as the ingenious extras that transform these simple dishes into world-class meals. Here are classics like Very Creamy Vegetable Chowder and Tuscan Bean Soup, as well as intriguing new creations like Caribbean Sweet Potato Coconut Soup, Golden Gazpacho, and Fennel Vichyssoise. Salads range from straightforward choices that are easy to mix and match, such as Spinach with Cilantro Cashew Dressing, Mexican Chickpea Salad, or Tunisian Carrot Salad, to satisfying one-dish meals like Broiled Tofu & Sugar Snap Peas or Persian Rice & Pistachio Salad. Each recipe is followed by helpful suggestions for selecting dishes so that creating well-balanced combo plates at home is a snap.

There are easy-to-use indexes of recipes by categories including children’s favorites, quickly made, low-fat, low-carbohydrate, and vegan dishes. And each recipe has a complete nutritional breakdown, so it’s simple to create menus for those with special health or dietary concerns. The section on transforming leftovers into sprightly new dishes also makes Moosewood Restaurant Daily Special a practical primer for those who want to make the most of seasonal bounty.

Few foods are more comforting–or satisfying–than a good soup and a well-made salad, and because many can be made ahead and served on demand, they are perfectly suited to the way we eat and live today. With more than 275 kitchen-tested recipes to fit any occasion, Moosewood Restaurant Daily Special offers years’ worth of inspiration for Daily Specials every cook will be delighted to serve.

Moosewood Inc. and the authors of this book have donated 1 percent of their royalties from Moosewood Restaurant Daily Special to the community food and nutrition programs of the Greater Ithaca Activities Center (G.I.A.C.) in Ithaca, New York.Since 1973, The Moosewood Restaurant, well off the beaten path in Ithaca, NY, has been demonstrating how exciting vegetarian cooking can be. Their excellent use of seasonings and the variety of their multiethnic menus have influenced chefs all over the U.S. Customers come from all over the world to dine at this shrine to natural foods at their best. The collective running the restaurant, whose members put together The Moosewood Restaurant Daily Special–their eight cookbook–spread meatless inspiration to home cooks, too.

At the restaurant, everything on the menu changes every day, except the daily special, which consists of a bowl of soup, a salad, and a hearty slab of bread. Here, in more than 275 recipes, you can have comfortable, easily prepared ethnic adventures inspired by places in every corner of the globe, from Tibet to Cuba. Beginning in the east, there’s Asian Bean Curd Soup, based on a rich broth, and fanciful Balinese Rice Salad, made with brown rice and a zippy, chutney-spiked dressing. Moving west, you find briskly chilled Golden Gazpacho, made using mid-summer’s sunny, yellow tomatoes, and Alabama Hot Slaw, a classic cabbage salad doused in a warmed-up dressing. For accompaniments, there are cloud-light buttermilk biscuits, vibrant curried croutons for enlivening soups and salads, and nine of the restaurant’s most popular salad dressings.

Every recipe is accompanied by information-packed notes about its ingredients, a nutritional analysis, suggested accompaniments, and alternatives, such as adding grated cheese, rice, or shrimp to Pepperpot Soup, a stew of greens, sweet peppers, tomatoes and potatoes, spiced with a Caribbean blend of thyme, cinnamon and chiles.

This book is a perfect way to get pleasantly acquainted with a wide variety of grains and vegetables, from millet and South American quinoa to daikon radish and tomatillos. A useful gift for students, beginning cooks, budget watchers (many of the soups require only water, not stock), newlyweds, and everyone who wants to eat well and healthfully, this sweetly illustrated book could live happily in any household. It includes some recipes using fish, as well as a good selection of vegan choices. –Dana Jacobi

Simply Salads: More than 100 Delicious Creative Recipes Made from Prepackaged Greens and a Few Easy-to-Find Ingredients 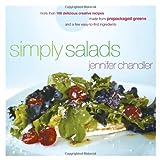 From bag to table, healthy salads have never been easier.

You’ve always known that eating green could be healthy, and now it’s easier than ever. With the abundance of supermarket selections of prepackaged greens, you can create a restaurant-style salad―along with a fabulous dressing―in your own kitchen.

Before bagged blends, a salad with four different types of lettuces was unheard of. Now there are more than fifty different combinations of lettuces, packaged in just the right size, from which to choose. Think beyond iceberg and romaine. The more than one hundred salads and dressings in Simply Salads are colorful, gourmet, and surprisingly simple to prepare. Whether you’re looking for the perfect complement to a main dish or you want a salad that can stand as an entrée, you’ll find the perfect salad, including such winners as: 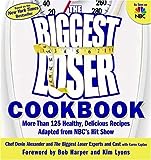 By The Biggest Loser experts and cast

Building on the groundbreaking success of The Biggest Loser brand, this sequel to last year’s best-selling book is sure to be a hit!

• 125 recipes from The Biggest Loser cast, trainers, and fans

• motivational before-and-after photographs of the cast

• dozens of trainer tips from The Biggest Loser trainers

• inspiring stories of how the cast members did it

Armed with this arsenal of nutritional information and training tips, readers will be inspired to achieve the dramatic weight loss transformations that have amazed TV fans around the country.

This digital document is an article from Mississippi Business Journal, published by Venture Publications on January 27, 2003. The length of the article is 797 words. The page length shown above is based on a typical 300-word page. The article is delivered in HTML format and is available in your Amazon.com Digital Locker immediately after purchase. You can view it with any web browser.

Saving Money with the Tightwad Twins: More Than 1,000 Practical Tips for Women on a Budget

While other books give advice about money markets and outwitting the stock market, Saving Money with the Tightwad Twins gives advice to the struggling woman on a really, really tight budget. She is the forgotten woman of “little time and no dime.” She may be single, married, a career woman or a stay-at-home mom, but whoever she is, she is looking for easy ways to organize her life and save money.

In this no-nonsense book by identical twin sisters Ann Fox Chodakowski and Susan Fox Wood, the Tightwad Twins, women will learn how to reduce or eliminate bills and manage and organize their homes. This “common cents”knowledge will revolutionize the way women look at money; for instance nearly everything can be recycled:

The tighwad twins also timesaving forms, quick-and-easy recipes for no-fuss, cheap meals, and lists of organizations that give away freebies. In no time at all, readers will reap the benefits of thriftiness and find time to enjoy their newfound financial freedom.

“The twins are masters at saving money.” – The National Enquirer

“These twins do a great job: humorous, but insightful on ways to save money and reuse everything!” -Crook and Chase